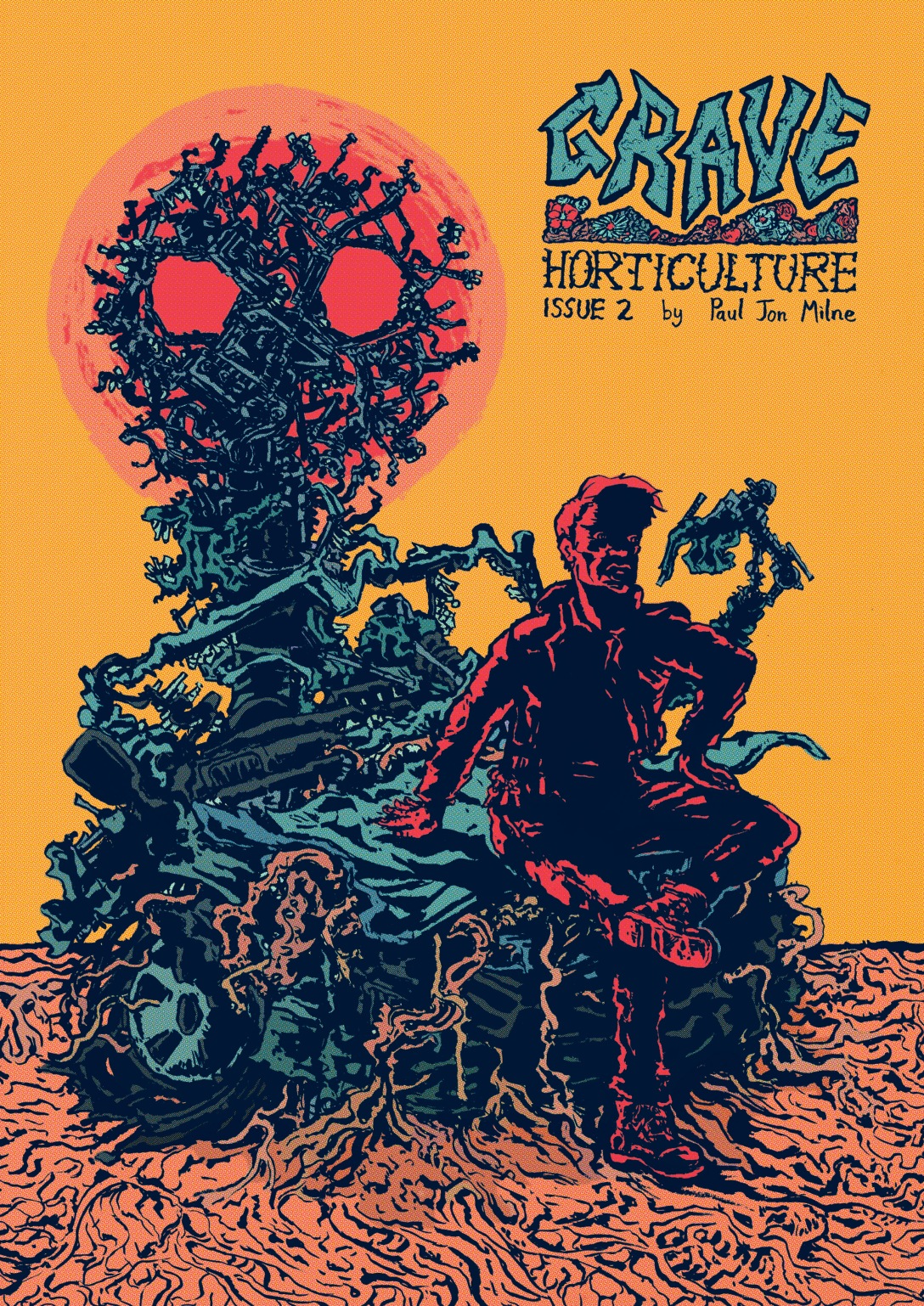 ZL – I feel like you’ve been doing zines for a while, when did you start and what inspired you to do so?
PJM – After I graduated art college in 2003, I started contributing pieces to various publications. I did a fair few one page things for excellent Dundee arts zine ‘Yuck n Yum‘, and I was trying to get some work going as an illustrator with varying amounts of ‘for exposure’ success, but finally decided to make an actual comic around 2009/10.  I had a lot of spare time due to being unemployed, and wanted to vent frustration about how rotten the ‘Jobseeker’ life was, and so I made my first ‘proper’ zine, Guts Power 1. It was pretty rudimentary but it exists and that’s what’s important.

Unemployment’s not a particularly entertaining subject and was covered surprisingly accurately already in League of Gentlemen, so in the end Guts Power was less about the dehumanising aspects of the jobcentre, and more about absurd jokes, ridiculously specific pop cultural references, body horror and musclemen in fetish clothing, plus lots of thinly-veiled self-hatred. Basically my attempt at a ‘Deadline‘ sort of thing but with much better taste in music.

Once I’d made issue 1 and realised that it was a thing I could actually do, it spurred me on to start making other comics. The final issue of Guts Power 6 finally came out last year, phew.

ZL – Do you remember the first time?

PJM – Comics-wise, I was very taken with the weekly Marvel UK Transformers comic,

specifically the ‘Time Wars’ storyline by Simon Furman and Andy Wildman. It seemed impossibly dark and important to young me, and maybe the first time I was aware of the comic as something other than just nonsense with my favourite toys in it.

But I still abandoned it when the Hero Turtles comic came out, as I sure did like those Turts, and kids are daft.

Other formative “what is this, this is incredible” moments as a tiny bozo were the Night on Bald Mountain section of ‘Fantasia’ , catching a random and unadvertised showing of Ghibli’s ‘Laputa’ on ITV on a school holiday (which seems to be an experience shared by many people of my generation), and first contact with Street Fighter 2, which broke my brain.

ZL – What single creation would you settle down with and just chill?

PJM – I find it hard to ever properly relax due to my delicious cocktail of mental health issues, but at the moment a pretty good time can be had lying in bed with a glass of milk and a volume of Q. Hayashida’s ‘Dorohedoro‘ which is ludicrously imaginative, gory and kinetic. It’s also very sweet, but crucially not twee. No tweeness at bedtime, I don’t want to go to sleep angry.

ZL – You have just published your second Grave Horticulture issue after what seemed like a good amount of success with the first publication, does that make it harder or easier this time around?

PJM – I suppose it was a kind of success as people seemed to like it, but the box of leftover copies cluttering up my bedroom says otherwise! The fact anyone had an opinion on it is quite daunting, and as a result while working on issue two I’ve definitely found myself overthinking things.

This is useful when it comes to stuff like “will people be able to follow this sequence?” as it pushes me to consider storytelling clarity, but not so useful when I start second-guessing nearly everything and worrying about if something seems “professional-looking”.

Best just to try and follow my instincts I suppose, which is certainly easier in theory.

ZL – (Let’s hope this never happens, but let’s also pretend!) A psycho runs up to you in the street and chainsaws your hands off. Your life is saved, but they couldn’t save your hands. Who draws in your hands’ place?

PJM – First of all, I hope the chainsaw person gets the help they need! And secondly I hope I’d still carry on with art in such a situation, but I suppose it’s good to have backup plans.

Not sure I’d want anyone else to draw my comics really, it’d be pretty unfair on them as my scripts are very vague and confusing. I mainly piece the story together as I go, apart from a rough outline and certain scenes. I’ve done ‘full script’ once or twice and it’s been much easier for me to draw, but the final results haven’t been as good, I don’t think.

I like the idea of making Michel Fiffe draw whatever I tell him to, but I would feel bad keeping him from making more issues of Copra.