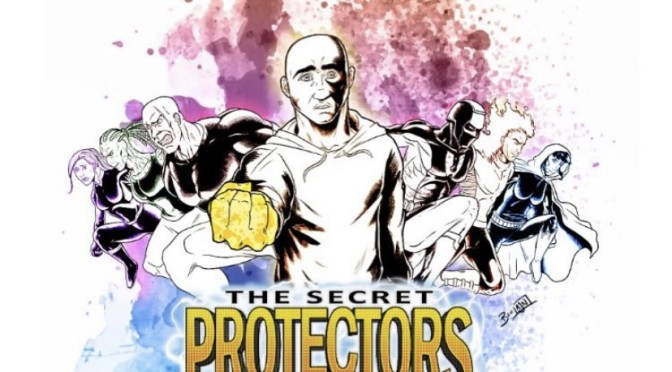 Ben is the artist of the small press comic The Secret Protectors (we reviewed issues 1&2 here and read our interview with them here) and does his own comedy strip on Webtoons called Guff Canyon.

Yesterday we posted an interview with Adam Wheeler, his collaborator and the writer on The Secret Protectors.

They’re currently Kickstarting a collected edition of the first 4 issues of the series (you can sign up for the first two issues for free here and you can see art from the series throughout the article!!) You can back it here.

You can find The Secret Protectors here

It’s over to Ben now

As a kid I remember seeing issues of Spider-man illustrated by John Romita Jr. Before that I’d devoured every Superman and Batman/Superman comic I’d been able to get my hands on, so I was fairly familiar with the John Byrne influenced style of the time but Romita Jr stood out and made me think about comics in a whole new way. They didn’t have to be in the typical comic book style, there was a lot more room for experimentation than I thought possible.

When Dragon Ball Z and Dragon Ball GT were airing on Toonami in the early 2000s I would record them on VHS. Then, after watching a new episode a couple of times I’d pinpoint some cool frames and pause the tape on those moments so I could copy them. This was not a good system. Anyone who’s ever paused a VHS knows the screen becomes a distorted mess of static, discolouration and incomprehensible blurs. Somehow, I did manage to eke out some good frames and had a lot of fun doing so.

I’m not sure this is a thought I’ve ever exactly had for a well-known creator. Growing up it was more about imitating people’s styles because I liked them, not necessarily to get better. That said, I do distinctly remember when I was about six years old, I saw an awesome piece of Batman fanart in a Batman/Superman comic. The kid who’d drawn it was ten and I remember being blown away and not being able to imagine being that good at ten years old. If I saw the drawing today, I’d probably think differently but I do sometimes wonder if I caught up with that kid in the next few years.

At the moment I’m really loving the work of Bilquis Evely of The Dreaming and Soroush Barazesh (AKA Koteri Ink) of Kings of Nowhere. They both have very strong, distinctive styles that create a great sense of tone and atmosphere. They’re also both just incredibly technically proficient.

I don’t listen to as much stand-up comedy as I used to, and I think that’s partly due to Frankie Boyle. Frankie Boyle is incredible at summoning up an incredibly precise image with as few words as possible. In his BBC Three show New World Order he calls upon imagery that’s mad, grotesque or surreal but it’s always to serve a greater point. In his Mock the Week days he’d take cheap shots for the sake of shock but these days he always has something valuable to say and always says it in a brutal but uniquely valuable way. If brevity is the soul of wit then he’s really got that nailed, and the ability to be concise is a huge element in both illustration and writing.

We’re relatively new to the con circuit as we’ve only been at it for a few years, but we’ve met some great people doing some really fantastic work. The first that comes to mind is Matt Stapleton (@what_if_stories), writer of the What If Stories. He takes pop culture icons and adds a horror twist. Die Hard of the Dead for instance is Die Hard plus zombies. His ideas have a lot of potential on their own but it’s the execution that really makes them stand out. His writing is great, and he’s teamed up with some fantastic artists too.

A few years ago I did a bit of a business course where I met comic book artist Sam Dempsey (@dempseyillustrates), we’ve kept in touch on and off over the years and whenever I see him pop up on my Instagram feed I know I’m in for something special. Every now and again I’ll check back on his feed just to get another look at all the awesome work he’s done.

Rhys Wootton (@rhyswootton) is another artist we’ve come across in our con experiences. He’s worked with Matt on What If Stories and has some really awesome comic art for sale. Definitely another one worth checking out.

My recent work has been a bit eclectic as far as comics go. I’ve been working on the superhero series The Secret Protectors with Adam for a few years now but since the beginning of 2020 I’ve also been doing a series called Guff Canyon which might best be described as gag strips on Webtoon. They’re mostly little four panel skits about whatever pops into my head. The Secret Protectors is definitely way more towards the mainstream end of the spectrum and heavily influenced by classic X-Men so it’s fun to have a different kind of creative outlet in a totally different style. I think it’s important to have different kinds of projects on the go so you don’t get creatively burnt out. Standalone jokes are also a fun way to stretch my uh…nonsense muscles…

all thing small pressed, self published and diy